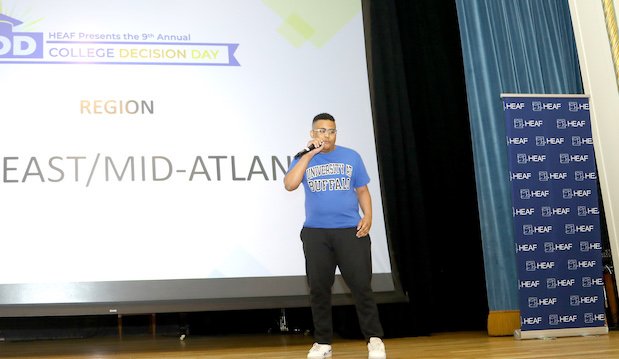 Frank Portes was 17 when he stepped off a plane and into a new life.

Portes had the best of both worlds growing up. Born in New York, he lived in the Dominican Republic. Studying at a bilingual school in Santo Domingo gave him a good command of English and Spanish. It was a seamless transition between summers in Washington Heights with family and winters back on the tropical island he called home.

At the end of every school year, Portes packed for a New York summer vacation. But after high school graduation, his mother casually mentioned that he should bring more clothes for the trip that year.

“You won’t be coming back,” she said.

Portes and his younger sister would be permanently moving to the U.S., she explained. Since he was a U.S. citizen, moving to the States would offer a better future. “She saw that as a good opportunity for me,” he said.

While the family had discussed moving before, it always seemed a far-off notion. This landed like a bombshell. “I never knew it was going to be this soon,” he said.

But the surprise decision jump-started his future.

“I knew I wanted to do something better,” he said.

Portes decided to go to college and eventually study law. His mother is an immigration lawyer in the Dominican Republic, and first summer job at age 15 was in a law office.

“I decided to go into a political science major and specialize in immigration law,” he said. “That way I can help my community have a better way of living, and live in a better world.”

Being born in the U.S. afforded him opportunities some never have. “For undocumented immigrants it can be very hard,” he said. “Many, many people like me come to this country and just want to earn a living for their families,” he said.

A family member told him about New Settlement, a Bronx-based non-profit dedicated to strengthening communities and offering assistance with housing, employment and education. The services at the organization, which is marking its 10th anniversary this fall, are free.

Admissions officers look at personal statements to get a sense of prospective students. It is one of the most difficult things a young person will ever write, not only because some 17-year-olds struggle to express themselves, but mostly because many young people lack the life experience to write a compelling story.

Portes wrote about the unexpected end of his idyllic youth, and how it thrust him into a world filled with possibilities.

“You only have 650 words,” Maniram said of the typical essay. “He wrote about what that meant for him. He was going to use this opportunity to continue to do the things he cared about here,” she said. “In writing the essay he was like, ‘I want to express how grateful I am for this opportunity, but also how it took me by surprise.’”

Portes set his sights on State University at Buffalo as his first choice. It is a competitive school with an accelerated 3 + 3 Program, which combines an undergraduate degree with a law degree. He knew it would be difficult because his senior year of college would also be his first year of law school. But it saves a year’s worth of college tuition.

With help from New Settlement and his own skill and determination, Portes was accepted last spring and is starting school this fall.

“But,” he said of the upstate school, “it’s still mostly, you know, white people.” Growing up in different states, immersed in various languages and cultures, Portes said he always understood everyone deserves respect. “We are all the same, it doesn’t really matter. So, if anything, I will use this to prove my own strength, and my dedication to myself,” he said. “And I’m also looking forward to having a lot of fun and making new friends.”

Challenges lie ahead. His grade point average has to remain high to stay in the program. His senior year will be the equivalent of simultaneously studying two majors. Portes said New Settlement’s College Access Center gave him what he needed to get into school. But their Success Program helps students who are in college stay in school.

“They give you emotional support if you need it,” he said. “They always tell us college is a good place to find yourself, have a lot of fun, make a lot of friends. But you have to remember your main goal is to learn and get that degree.”