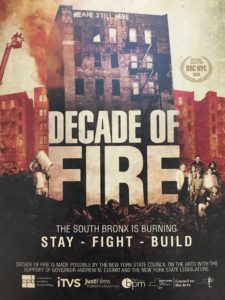 Vivian Vázquez asked the Bronx teens if they had heard derogatory comments about their borough. Hands shot up. Vázquez’s new documentary film Decade of Fire gets to the root of this damaging label, which persists to this day. Over the span of ten years starting in the late 1960’s, fires ravaged the South Bronx, leading to loss and trauma across what had been a vibrant and diverse community. The common perception is that residents were responsible for the fires. Decade of Fire depicts how this blame permeated the psyche not only of American culture but of the fire’s own victims. It proceeds to decisively unpack this stock story, which is in fact false, and to reframe the fires as the outcome of systemic racism and neglect.

Our team saw Decade of Fire in March at a Hostos College screening which was sponsored by the school, New Settlement’s CASA, and Banana Kelley CDC. Vázquez, a Co-Director and Co-Producer, is a colleague at New Settlement’s Community Campus. Together with an all-female directing and production team, she won the Women in Film Stella Artoir award at the 2019 Sundance Film Festival. Closer to home, an audience member noted the significance of the film’s being made by “one of our own.” Vázquez grew up in the South Bronx during the ‘60’s and ‘70’s and so her story is intertwined with the subject. The film was a tribute not only to the grit of the Bronx, but to its joy and vitality, qualities that are embodied by our children and families. The filmmaker doggedly pursuits the truth because of her own proximity to the tale.

The fires ultimately subsided, and the film reflects on how that came to be; it credits the many residents of the Bronx who together rebuilt their home. Communities organized tenant unions, repaired housing, and advocated for change from elected officials who up until that point had broken promises. Grassroots activists continue to fight oppression; today, the battle in the Bronx is over displacement.

A colleague recently asked, “What does it mean to be a neighbor in this place?” In the Bronx, it means understanding this legacy and its parallels to today. For the food movement, it means refraining from blaming individuals for unhealthy behaviors. Instead, consider how redlining caused food apartheid and choose to invest in counteracting these forces. We can uplift the stories of those who, for example, create green spaces out of vacant lots through sweat equity just as tenants once restored apartments. Finally, we must stand in solidarity with activists leading the cause for liberation.

Decade of Fire will premiere on PBS in 2020.