As gentrification has escalated over the past couple of decades in New York City, the threat of displacement has come to feel inescapable, especially for low income people of color. The concept of who is allowed to own land, and who land is taken away from, has been a contentious issue throughout the history of the United States as well as in other parts of the world. Did you know that in Brazil in the 1980’s, thousands of families who had been displaced from their homes came together and successfully occupied land for themselves to live and grow food on, resisted a military counter-insurgency, and refused the government’s offers to resettle them in an alternate location?

The Landless Workers’ Movement or MST, which currently has over a million members, is considered by some to be the greatest social movement in Latin America. It began in 1980 with 6,000 families, about 1,000 of whom came from Nonoai where they had been forced out of their homes on an Indian Reserve, or from Passo Real where they were displaced for the construction of a hydroelectric dam. They created an encampment on a piece of land between three unproductive estates in Rio Grande do Sul, seeking the opportunity to turn it into homes and farmland. Despite many clashes with government and many members killed throughout the years, the movement has persisted and continued to occupy more land. Citing a section of the Constitution of Brazil that states that land property should fulfill a social function, the movement maintains its position that land reform is legally justified. There has always been an agricultural component to the movement, recently including protests against testing of genetically engineered crops on land in Brazil. 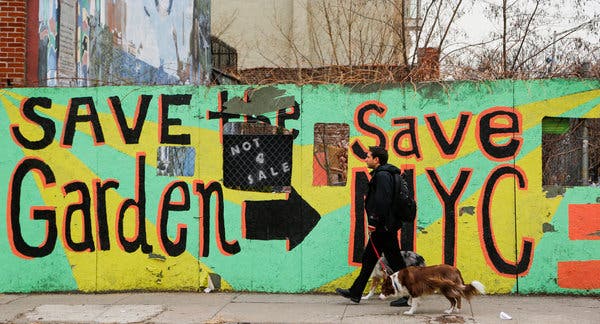 Today in New York City, there is a longstanding conflict between land use for housing and land use for community gardens. Many community gardens were started by African American and Latinx New Yorkers during the financial crisis of the 1970’s via “guerilla gardening” – the act of gardening on land that the gardeners do not have the legal rights to cultivate, such as abandoned sites, areas that are not being cared for, or private property – much like a smaller-scale version of the Landless Workers’ Movement’s occupations. However, these days much of community gardeners’ focus has shifted to protecting existing gardens. Although NYC’s GreenThumb program licenses parcels of land to community groups for use as gardens, their status is often not permanently secure, especially in neighborhoods where developers are interested in building. This conflict is often heightened in neighborhoods where the residents are mostly renters and are under threat of being displaced themselves, and gardens provide an opportunity to feel some ownership and connection to the land.

In the 1990’s when the city wanted to sell many community garden sites to developers to convert them to housing and commercial space, organizations like New York Restoration Project, the Trust for Public Land, and what later became the New York City Community Garden Coalition fought to preserve many of the gardens. But the fight was not over – according to the New York City Community Garden Coalition’s website, New York City has lost around 30 gardens since 2002, and 27 more still remain classified as “subject to development” by the Department of Housing Preservation and Development. In 2015 the city issued another call for developers to submit proposals for city-owned sites, many of which are currently community gardens. Community members built these gardens from the ground up and put their time, energy, and resources into the gardens for years (sometimes decades) so that their families could reap the countless physical, mental, cultural, and economic benefits. They continue to fight for what they have created, and we stand in solidarity with them.

About this series: The fight for fresh, affordable, culturally appropriate food has been part of many social movements throughout history and all over the world. We were inspired by Phat Beets’ History of Food as a Tool for Resistance curriculum to share some of these stories, and to connect them with modern-day campaigns for food justice in the United States. Read all of the posts in the series here.