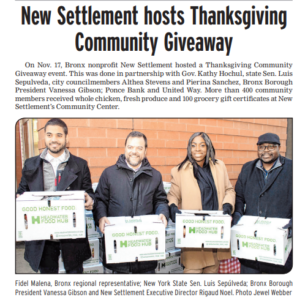 The most influential movers and shakers in the Bronx will be named to the Power List. The event recognizes those named for their continued commitment, impact and influence these individuals have sustained on the Bronx’s existence over the past year.

In addition to honoring these outstanding individuals, the event will feature a raffle with one hundred percent of the proceeds going to a local cause.

The Bronx Power List, the ultimate networking event, serves to connect these power players to do business and to do good for the community while celebrating their achievements.

The 2022 Bronx Power List, in formation, is currently as follows:

Learn more about the honorees at BronxPowerList.com. For tickets, sponsorship or to learn how to be named to the Power List reach out to Demetra Mattone, Director of Corporate Events at DMattone@SchnepsMedia.com or at (718) 260-4512.

Mr. G tours the New Settlement Community Center with a visit to water aerobics, Bronxie, and our rooftop garden, for PIX11’s It’s A G Thing.

A English/Spanish language infographic showing highlights and impact from the 10th anniversary celebrations for the New Settlement Community Center. 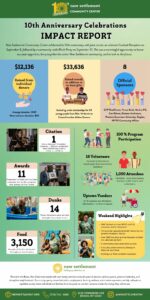 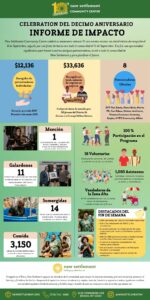 Senator Luis Sepúlveda and the New Settlement Community Center host a free backpack and food giveaway to support families as children head back to school.

Celebrating the 10th anniversary of the New Settlement Community Center was a community-wide affair. Families enjoyed fun fair activities, bouncy houses, and program demos, and were provided information from each New Settlement program and local businesses.

The New York Yankees today announced the organization’s annual celebration of Hispanic Heritage Month. Highlights in 2022 include recognition of community members through the Yankees’ Hispanic Heritage Month Awards program, Latin-inspired food items available to fans at Yankee Stadium, and a unique ticket offer in which fans can recognize their Latin-American heritage with a New Era Yankees cap emblazoned with their homeland’s flag.

The Yankees will again bestow their annual Hispanic Heritage Month Community Achievement Awards to individuals and organizations making a profound difference in the lives of our community. Recipients will be highlighted on Yankees social media platforms and recognized in a pregame on-field ceremony on September 21, prior to the team’s 7:05 p.m. game vs. Pittsburgh. This year’s honorees are:

•  New Settlement (newsettlement.org) is a Bronx nonprofit organization that aims to break systemic barriers, advance justice, promote leadership and strengthen neighborhoods in the borough. As part of programming in 2022, young people from New Settlement participated in the Yankees Healthy Home Plate Program, which teaches children how to prepare and incorporate healthy, sustainable and affordable meals into one’s lifestyle. The students took part in a series of hands-on cooking demonstrations at Yankee Stadium led by Legends Senior Executive Chef Matt Gibson. Each participant also received a chef’s jacket, a cookbook of healthy recipes, a bag filled with provisions to prepare healthy meals at home, a gift card from Peapod and tickets to attend a Yankees game.

•  Citymeals on Wheels (www.citymeals.org) provides a continuous lifeline of nourishing meals and vital companionship to nearly 20,000 homebound elderly New Yorkers. Working in partnership with community-based organizations and senior centers, Citymeals has prepared and delivered over 6 million weekend, holiday and emergency meals since the start of the pandemic. Last year, nearly 23,000 volunteers gave more than 83,000 hours of time to Citymeals’ mission.

•  NYPD Lieutenant Michael Almonte had a distinguished 20-year career on the force and recently retired on July 29. He was instrumental in the formation of the NYPD’s Blue Chips program, which the Yankees honored during HOPE Week 2022. Blue Chips is a co-ed youth and mentoring sports program that focuses on bridging the gap between police officers and young people throughout New York City. The year-round program serves young people ages 12 through 17 and connects them with mentors in the NYPD to put them on a path to success.

Additionally, in honor of Hispanic Heritage Month (HHM), Yankee Stadium’s food service provider, Legends Hospitality, is highlighting five Latin-inspired menu items, two of which have been newly created for the month. Photos may be found here.

→  La Dulce Vida Milkshake: A Stadium favorite, available in vanilla or chocolate. Made with dulce de leche and tres leches, with a cupcake, churro and blue and white Yankees sprinkles. Served in a souvenir cup. Available at Shake Stands at Sections 112, 125, and 324.

Frank Portes, a freshman student at the University of Buffalo, and College Access Center and YAOI participant, talks about the impact of New Settlement programming, with OPEN Host Daren Jaime.