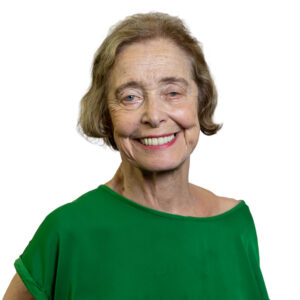 Carol Lamberg worked at Settlement Housing Fund since its inception in 1969 and served as its Executive Director from 1983 until early 2014. Under Carol’s leadership, Settlement Housing produced more than 8,700 apartments in 55 developments, retaining ownership through partnerships or affiliates of 29 buildings including more than 1,300 apartments, with concentrations of housing in Brooklyn, the

Bronx and lower Manhattan. Most of these developments are mixed-income buildings, occupied by low- and moderate-income families including some 30% who were once homeless. Carol’s signature projects include Semiperm Housing, which provides longer term transitional housing with on-site services to single parents leaving the shelter system, and the New Settlement Community Campus, public schools and community center with pool, dance studio, green roof terrace and multi-purpose spaces in the southwest Bronx neighborhood. Settlement Housing has continued to build and rehabilitate property in the Mt. Eden section of the Bronx, where it maintains its largest collection of housing called New Settlement Apartments. Carol has recently published a book about the history of the New Settlement development, the largest of the Koch 10-year housing plan, and another major revitalization project within the Two Bridges Redevelopment Area, where Settlement Housing created over 1,700 units of affordable housing in several sites on the Lower East Side.

Ms. Lamberg’s first employers were Edward Banfield and James Q. Wilson, who hired her to work on their book, Urban Politics, which was published in the mid-1960s. She was vice president of the housing consulting group Roger Schafer Associates, and in that capacity worked for the Executive Council of the Episcopal Church, Knickerbocker Hospital (NY), and Settlement Housing Fund, among others. Ms. Lamberg also served as staff director of the New York Housing Conference and has drafted amendments to the Housing Act of 1937, the National Housing Act, and the New York State Private Housing Finance Law. She is a board member of the National Housing Conference, and has lectured at Columbia University, Harvard University, and the New School for Social Research. She graduated from Radcliffe College and was a Loeb Fellow at Harvard in 1976-77.